Myth Busting: What is up with “birthing hips”?

I remember when I was 12 years old, I went into the bathroom during my lunch period to put on a pad. I was in the 7th grade and had just gotten my period a few months prior. I was only comfortable using pads at that time because I found tampons very intimidating. Two other girls, much worldlier than I, but on the same cycle as me, apparently, sat in the stalls next to me and talked about how the plastic tampon applicators were the only ones worth using. In news to me, the plastics were incomparably superior to their cardboard compatriots.

(An aside about period products, my mom was never warned about a period or instructed on how to use period products, so she got some tampons at the gas station and inserted one with the cardboard applicator still attached. Talk to your kids about menstruation…) 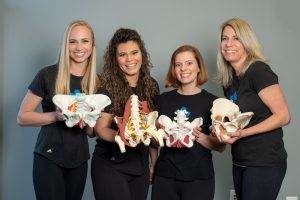 Back to the 7th-grade bathroom break: as we emerged from the stalls, one of the female janitorial staff was in with us re-stocking something or other, and she looked at one of the worldly girls and said “Ooo, girl! You got some childbearing hips! A baby will slide right outta there.”

It stuck with me because she had not, as I would have preferred, said this to me, who had already harbored a lifelong goal of one day becoming a mother (I realize the fact that this was my first reaction says more about me than the myth itself). I’m pretty sure in retellings of this story, I lied and said she was talking to me because I wanted to be the one associated positively with birth.

In actuality, she should have said this to no one because a) what a yuck thing to say to a child and b) what a wildly inaccurate physiological statement.

Let’s bust this myth. There are no such things as birthing hips.

All hips belonging to birthing people are birthing hips in the sense that they will be present during a birth, but your hip width does not determine your ability to birth or the manner in which you birth.

Hip width really only relates to the position/angle of the head of the femur and the angle of the hip socket, something I feel I can safely assume most of us are not too concerned about.

So what actually happens with your pelvis during labor? Let’s break it down.

During labor, the pelvic outlet needs to open to allow baby to descend and eventually exit. Pregnancy hormones allow for increased laxity at the SI joints and the pubic symphysis, facilitating this opening. So with all this beautiful laxity, the pelvis spreads to open the pelvic outlet, the sacrum flexes, and hopefully, internal rotation of the hips allows for even more opening so that baby can descend and get the heck out (at OrthoPelvic, we teach birthing positions that increase internal rotation to facilitate a shorter, smoother departure from the birth canal).

So in review, in order to give birth, we need hip rotation and movement of the pelvis. We do not need wide hips.

If you deal with hip pain or you’ve had hip issues, yes, absolutely get evaluated by a pelvic health PT, and let’s see what’s going on and what we need to do to get those hips in optimal health.

If you are pregnant and you have dealt with pain or muscle weakness anywhere in the body, but especially in the core, low back, and hips, definitely get evaluated by a pelvic health PT and start addressing those issues as soon as possible because the more optimally your body is functioning prenatally, the more optimally it will function in birth and postpartum.

Additionally, remember that pelvic health PT can help PREVENT many common postpartum health issues. Pelvic Health PT is for every prenatal and postpartum person regardless of where you are in your pregnancy and what type of birth you desire to have.

If anything I’ve said resonates with you, book a FREE 10-minute consult call today. And remember: your baby is made for your body. You got this, mamma! Give us a call today ✨

Be empowered in education, 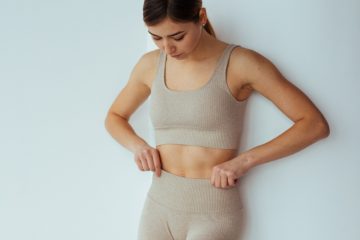 Why You Should Fold Down Those High-Waisted Leggings

High-waisted leggings have been a girl’s best friend for the better part of a decade. But should they be? From a Pelvic Health perspective, the answer is no, they should not be. Remember that when Read more…